This past Saturday we played two games of my Liftwood and Steam rules, a fast-play VSF ruleset (based on A Sky Full of Ships) I've put together to use with my Aeronef miniatures. The game was based on Steve Blease's Dreyfus Affaire Aeronef scenario, and proved quite fun. In short, the French had to escort the prison transport Triumphant off the table, while the British had to rescue a prisoner from the transport and destroy all witnesses, including the French warships. We had enough time for four players to play two games, at about an hour and a half per game; like I said, it's intended to be a fast-play ruleset.

As always, click on the images to see larger copies of them. 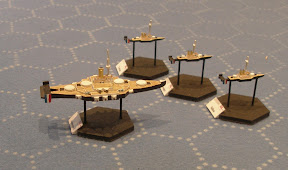 The British battleship Agincourt and the gunships Vulcan, Avenger and Sidon wait for the French transport and her two escorts.

Unknown to the British, several 'nef destined for French Guiana were accompanying the Triumphant as a training exercise. In the distance, the Agincourt comes into view. 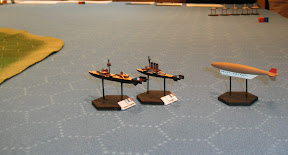 To the southwest, more British vessels (the cruisers Exeter and Lahore, and gunships Tiger, Dauntless and Amphion) move in as well.

The Sidon spirals to the water below.

To the west, the Dauntless goes down as several French destroyers move to attack. 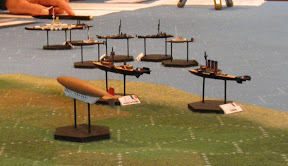 The Agincourt turns to the east to intercept the Triumphant as the British and French escorts pass each other in line. 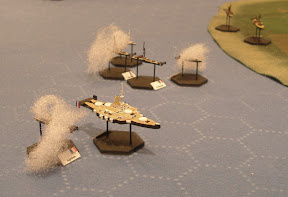 The French destroyers Aquilon and Vaubon are devastated by the Agincourt's concentrated fire, while the cruisers Linois and Jeanne la Pucelle destroy the Avenger.

The Exeter and Lahore move into line as they approach the island, with the French destroyers harassing their flank. A torpedo destroyer soon will get a line on the Exeter, inflicting severe damage before later being destroyed. 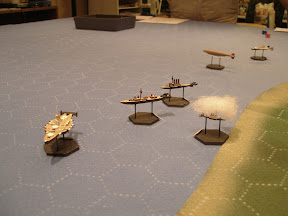 The Exeter suffered rudder damage in the rocket attack, forcing her into a turn to starboard. Fortunately her captain wanted to turn that way regardless, and the crew was able to repair the damaged rudder quickly. Here, she moves in on the fleeing Triumphant as French cruisers do for the Vulcan and move to take on the Agincourt. 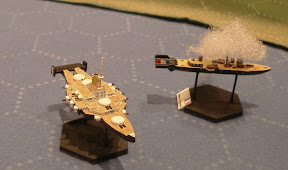 The Agincourt sends the Jeanne la Pucelle in pieces to the waters below. 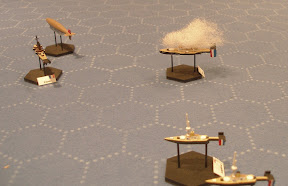 The Linois finally breaks the Exeter. The Triumphant flees past her toward safety. 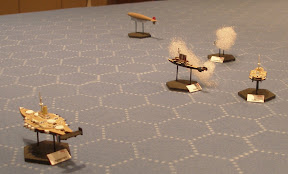 The Linois comes apart under the withering fire of the Agincourt and Lahore. With no ships to defend her, the Triumphant's captain quiets her engines and strikes her colors, not knowing what awaits.


After a quick lunch we replayed the scenario, mixing up the players a bit. This time, things were a little more... explosive.

The Exeter, Lahore, Dauntless, Tiger and Amphion come in on the east side, while...

The Agincourt, Vulcan, Avenger and Sidon move in from the west.

The French divide their forces: the Jeanne la Pucelle moves against the Agincourt while the Linois escorts the Triumphant away from the battleship (but toward the enemy cruisers). 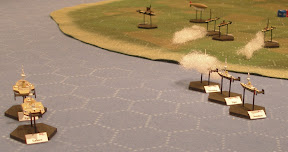 Torpedoes (unreliable but devastating one-shot weapons in these rules) from the French destroyers obliterate the gunboat Dauntless and heavily damage the Exeter.

The Exeter comes apart under more fire, but she and the Lahore do in a French destroyer in exchange.

A barrage of torpedoes from the last of the torpedo destroyers does for the gunboat Sidon.

More ships of both sides are knocked from the sky. The Triumphant takes fire from the gunships as well, damaging her to the point that she strikes her colors. Now the French must destroy or run off all the British ships to prevent her capture.

In the end, the French fail again. The British recover the spy and then destroy the transport, leaving no witnesses of the rescue.
Posted by Bill at 9:32 PM

It was a fun two games. I played one of the British commanders in both games and kept singing, "Rule Britannia, Britannia rule the waves!" as the French aeroneufs plummeted into the water.