On Saturday, September 10, Jay and Jim traveled to Hattiesburg for Tim Broome's HubCon.  Although we only played in a single game, we did buy some goodies and saw some old friends.


The following pictures are of part of the 15mm Napoleonic game run by Travis Melton in which Jay and Jim played.  Jay commanded the French along with David Arceneaux while Jim commanded an Austro-Russian force along with Duane (last name not known - sorry Duane).  It was a hard fought game that came right down to the wire.

Jay looks over the battlefield prior to the action starting.  The scenario was set just before Leipzig (1813) as a small Austro-Russian force advanced through a gap, opposed by a small Franco-Polish-Swiss force.  The picture shows two French battalions and a battery on one of a pair of hills while in the foreground Jim's Russian cavalry and Austrian infantry advance in the attack. 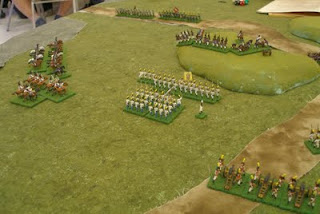 As two Polish battalions advance in support (left rear), the Russian cavalry is poised to attack the flank of the French on the hill while an Austrian and a Hungarian battalion, supported by an Austrian battery, attack their front. 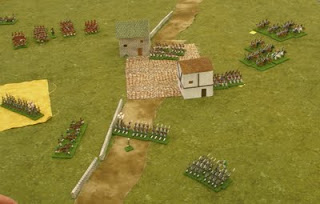 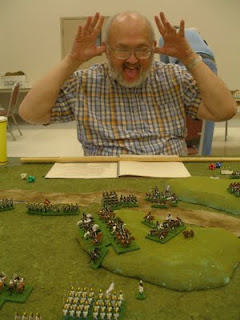 After Jim's Russian dragoon regiment rode over and routed a French infantry battalion off the hill and threatened the artillery battery from the rear, Jay returns Jim's salute of joy with one of derision of his own.  In the ensuing pursuit, Jim's dragoons sabered his gunners and occupied the hill. 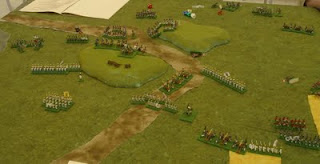 Towards the end of the action, the Russian dragoons occupy the hill but are threatened by several French and Polish units.  More Austrians strive to get forward to relieve the dragoons but just couldn't make it.  On the far right, a Polish battalion engages a Russian grenadier battalion supported by the remnants of an Austrian battalion and a battery of Austrian 12-lbrs.  The Swiss were speedily sent scurrying to the rear.

At the battle's end, the French had held up the Austo-Russian advance enough to allow Napoleon to concentrate his army at Leipzig.  But they withdrew during the night as overwhelming reinforcement from the Allied Army of Bohemia began to arrive.

Fun appeared to be had by all in attendance, from FoG tournament participants to historical gamers to 40K gamers to a rather loud and enthusiastic D&D group.

Thanks, Tim for a small but enjoyable local convention!

Posted by ColCampbell50 at 8:35 PM No comments:

I decided to try the Uncharted Seas game system, created by Spartan Games, after playing an introductory game at Bayou Wars in June 2011. I looked into buy the rules and 2 fleets to get started. I figured if I liked the game I could expand into other fleets or con some of the other gamers in my area to buy some.

First I had to decide what 2 fleets with which to start. I searched several websites that offered some or all of the starter fleets and individual models. I found that Amazon.com had the best price for the rule book and then picked the Iron Dwarves and Orc Raiders starter fleets to begin. 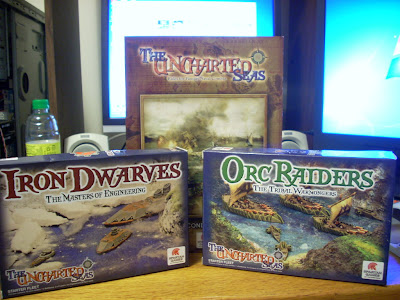 Within a week all the items had arrived. The starter fleets were a nice surprise. In each box were not only the 10 ship models but also a deck of race/fleet cards, punch out turn and fire gauges, stats card for each type of ship and a sheet of cut out tokens (numbers for crew casualties, damage points, etc.). You can also download the turn gauges and stat card from the website. The rules are printed on glossy paper, well put together and come with a laminated quick play sheet and critical hits sheet (these sheets can also be downloaded from the web site). The rule book is just over 100 pages, but the core rules are in a 20 page section (a good portion of this section are pictures, examples of play and diagrams) with the rest being add-on rules and background on each of the races. 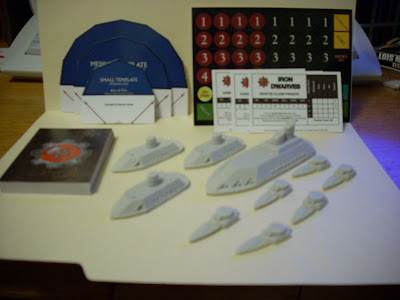 I started painting on the Iron Dwarves since these ships need no assembly. I picked a cruiser and a frigate to try out my paint scheme. I gave each a quick scrub to get rid of any oils or release agents and tried to paint a wash on the decks. The acrylic paint puddled and would not stick so I cleaned it off and set up to use a spray primer.

First I painted a brown wash on the decks to get into the spaces between the deck boards. Then some black around the guns ports, on the top of the smokestacks and other openings. My final preliminary step was to paint a base coat of grey on all the plated surfaces (armor and stacks). 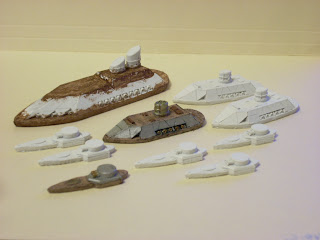 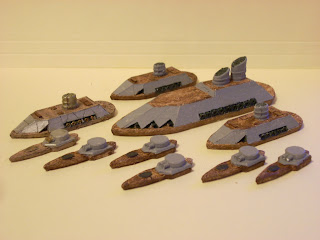 I then used lighter shades of brown and dry brushed the deck areas. This emphasized the deck boards and left the spaces between the original dark brown. My dry brush technique was not always up to the task and in a few places I got too much paint on the ship. Overall the look works well. Later I went back and used a darker brown to paint the hatches and some gratings. 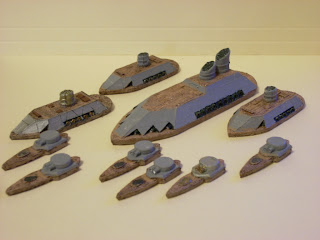 I next painted over the grey areas with Testor’s “steel” color. I left some random spots of the grey showing to give a bit of contrast. For the cannon barrels I painted a coat of brass and then went back and covered that with bronze (for some reason my bronze paint didn’t want to cover the black with one coat). I dry brushed bronze on some of the steel plated areas to give it a tarnished look. 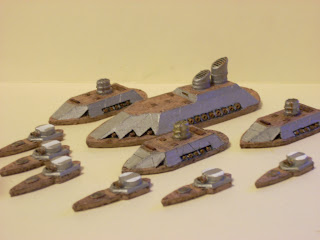 I painted some recognition stripes on the turrets on the 2 frigate squadrons. I thought about doing the same to the cruisers but decided not to at this time. The ships were fairly easy to paint but my technique leaves something to be desired. But for gaming purposes they will site my needs. 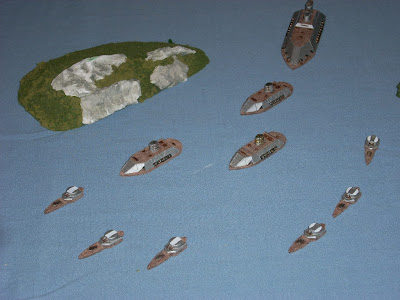 After painting the Orc starter fleet. Bill and I played a game on Labor Day to try out the rules. They are based on a "activation" type turn where a part of the fleet moves and fires before any other part (known as squadrons) moves. Sides alternate squadrons. 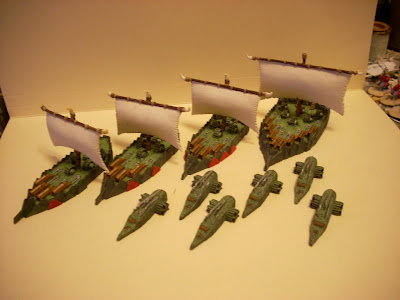 Some of the things we noted while playing were:
1) Need markers to show what squadrons have activated
2) Since range bands are 8 inches a dowel rod with different colored bands would be helpful
3) When the ships get close together a different type of turn gauge (thinner than the ones provided) would be easier to use.

By the way the Orcs (sailed by Bill) defeated the Dwarves (played by me).