On Saturday, August 1, six of us enjoyed a romp in the French countryside as the Germans and the Americans went against each other.

The Americans were less than inspiringly commanded by Jay Stribling, Bill Hamilton, and Ed Sansing, each with an American leg infantry company, plus they had a platoon of 81mm mortars to provide fire support.

The Germans were capably commanded by Sean and Jim Pitts, each with a Fallschirmjager (parachute) company, and Phil Young, with a German infantry company, plus they had a platoon of 81mm mortars to provide fire support. 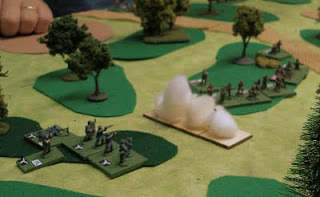 One of Jim's Fallschirmjager platoons prepares its firing positions behind a smoke screen prior to engaging one of Jay's American infantry platoons.
[click on picture for a larger image.]
The full battle report will soon be available on the Jackson Gamers web site.
Posted by ColCampbell50 at 8:33 PM No comments: