Escape of the Agincourt playtest

On May 29th, we played a test game of my Bayou Wars game, Escape of the HMS Agincourt. We actually played two games, as it became obvious in the first playthrough that I made some errors in setting it up. The goal of the British and Americans was to get the Agincourt off the far table end, while the Germans and French had to destroy her.

Here are photos of the two games, along with commentary. As always, click to view a larger image. 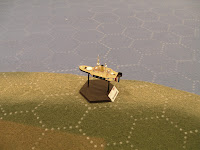 The rag-tag remnants of a strike fleet comprised of British and American ships frantically make their way back to Britain's shores. 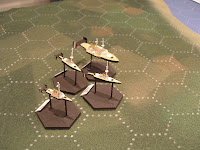 A small squadron of British Aeronef were in their docks for refit and lifted off to assist in the defense.

A French raiding flotilla racing in to cut off the British fleet's escape.

The strike fleet turns to gain more distance against the faster French vessels, with the Agincourt struggling along behind. 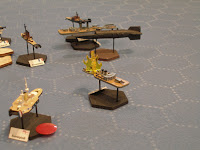 British fire caused a critical hit which set this German vessel ablaze. The red marker on the Rawalpindi indicates that the ship has fired, to help the players keep track.

French fighters (launched from the 'dig carrier Les Arc) swarm after the Agincourt as the Germans and French encircle her. This is where I began to see the problem I had created; the Agincourt simply wasn't fast enough to escape. After some discussion, we decided to reset the game and fiddle with the settings a bit.

Setup was much the same. We added some coastal defense batteries, marked by the empty bases along the coastline. 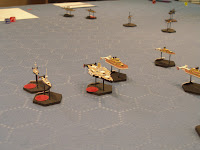 The strike fleet moves straight toward the coast as the enemy quickly closes the distance. This time, the engine damage wasn't as severe, only limiting her to Cruise speed rather than Slow. 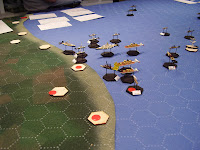 Fire from the defense batteries takes its toll on the French cruiser Formidabile, causing fires to break out on her hull. 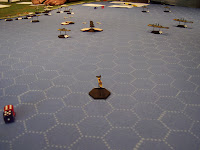 The French destroyer Albatross, her weapons batteries reduced to uselessness, flees the battle while the Les Arc launches more fighters in the distance. 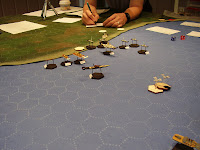 The swift French vessels were torn to pieces by the concentrated fire of the British and Americans. Note that the defensive batteries have moved; we decided the fire was _too_ concentrated, and spread them out more so they wouldn't be quite so overpowering.

The fleet moves closer to its goal, harried by the Les Arc's fighters. The Germans continue to close, heavy fire tearing into the fleet. The Agincourt took two criticals at this point. One damaged the engines further, reducing her to a maximum of Slow and forcing her to coast to a halt until repaired. The second damaged her rudders, locking her into a slow left turn. The rudder damage was repaired at the end of this turn.

Two turns later. The Agincourt never managed to repair her engines. the attacking ships managed to penetrate the defensive batteries and destroy her from point-blank range.


Overall it went well. The second game took about two and a half hours, with players who were familiar with the system. The game itself is easy to pick up (it is based on A Sky Full of Ships, though heavily modified). I expect that I can easily explain the rules to the players and comfortably fill the four hour time slot.
Posted by Bill at 6:39 PM No comments:

Naval Action in the Slot

On Memorial Day, Travis came over from Vicksburg and introduced a few of us to his new WW2 naval rules, Seas of Steel.  We pitted a Japanese force of four battleships (including the Yamato), one light cruiser, and two destroyers against an American force of three battleships and five destroyers.  The Japanese mission was to scatter the US ships and bombard Henderson Field on Guadalcanal, rendering it unusable to American aircraft.  The Americans were out to stop the Japanese and sink as many of their ships as possible.  We used Travis' 1:2400 scale warships that he painted a good while ago.

Travis' rules are simple but give an excellent rendition of WW2 naval action.  Even our own expert, Jay, gave them 2 thumbs up!

Here are the pictures I took with brief captions.  As usual, please click on the pictures for a larger image.

The Japanese battleship Fuso glides through the deep waters of Iron Bottom Sound on its way past Savo Island and a rendezvous with destiny. 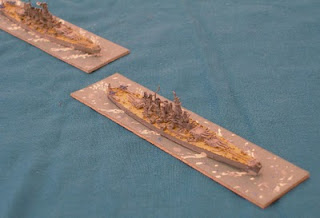 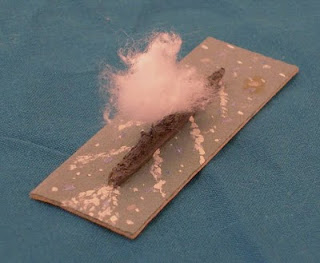 The Japanese Fuso battleship ablaze from a lucky American hit.  Fortunately the well-trained damage control on the Fuso extinguished the fire immediately.  In Travis' rules, fires continue to burn until brought under control, inflicting a 1/2 hull box damage per turn.  On a smaller ship, that can be fatal.

The right hand American column of the battleship South Dakota and three destroyers (one is trailing the battleship) target the lead Japanese ship, the cruiser Nagara, of the Japanese left hand column.  She has also been set ablaze but her damage control parties could never bring the fire under control.

Another fire is started on the Japanese battleship Nagato which took several turns to extinguish. 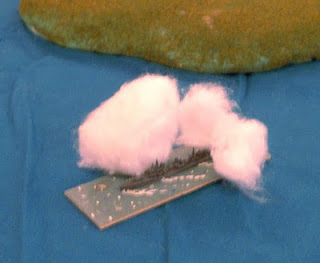 After firing its torpedoes at the Washington (and missing), the Japanese destroyer supporting the right hand division is finally sunk along the shore of Guadalcanal.  A few of the ship's company got to shore and joined their comrades in the Imperial Army to continue the fight.  Banzai!! 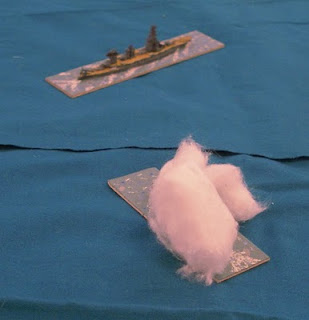 Almost immediately thereafter, the Fuso blasts an American destroyer to bits, fortunately before she could fire torpedoes. 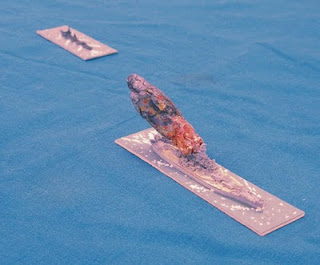 But horror of horrors!  The Yamato's big guns plus three Long Lance torpedoes put the South Dakota down.  Here it explodes as it goes to join the wrecks littering the bottom of Iron Bottom Sound.  The ship behind her is the Japanese destroyer who fired the torpedoes.  She is continuing towards Henderson Field. 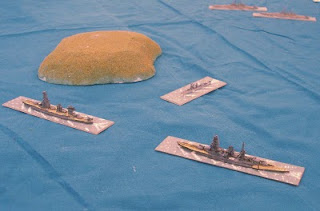 The Japanese right column battleships, Fuso (lead) and Nagato, continue to engage the Washington and North Carolina (background) while a surviving American destroyer makes a frantic torpedo attack.  Luckily for the Fuso, the American torpedoes functioned as they normally did and no hits were made. 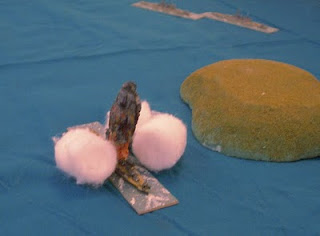 But as soon as the Fuso cleared Savo Island, the North Carolina gave her the coup de grace as she explodes and sinks.  That's one American and one Japanese battleship sunk, so far. 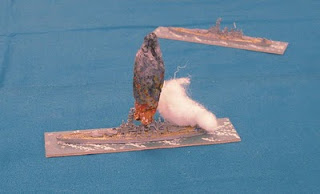 And then the Yamato brings her heavy guns to bear on the North Carolina.  Oops, not surviving anymore as she joins her sister on the bottom of Iron Bottom Sound.  The Washington is in the background.

And the Yamato serenely continues on her way towards Henderson Field.
The outcome of this encounter was that the Japanese succeeded in bombarding Henderson Field, but with just the Yamato still in fighting shape (the Kirishima and Nagato were badly damaged) and only one destroyer left, they couldn't hang around.  The Americans only had one battleship still afloat and she was damaged.  They lost two battleships and all five of their destroyers.  The Japanese lost a battleship, a light cruiser, and one destroyer; the Yamato was hardly scratched, but their other two battleships were heavily damaged.
We all liked Travis' rules and look forward to playing them again.
Posted by ColCampbell50 at 5:01 PM No comments:

I conducted the 2nd and final play test of my Bayou Wars convention game on Saturday, May 15.  I had made a few troop changes and included some supply objectives for the attacking native forces to destroy.  Here are some pictures of the game, which ended in a significant Imperial victory even though all of the Egyptian cavalry, one Egyptian infantry platoon, and one Egyptian gun were destroyed.

Please click on the pictures for a larger version. 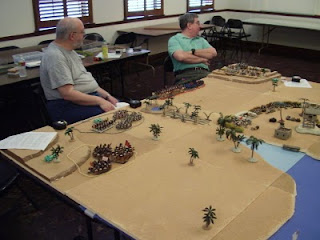 An overview of the battlefield with the zariba and supply base on the center right and the Baja, Dervish, and Arab forces arrayed around it from center left through upper right. 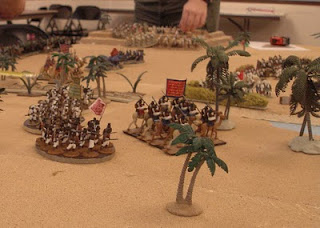 The initial advance of the Dervish and Beja warriors against the zariba.  In the background, the two Arab clans also advance. 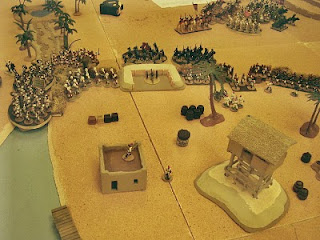 The initial attack by Dervish (on left) and Arab (center) warriors against the zariba. 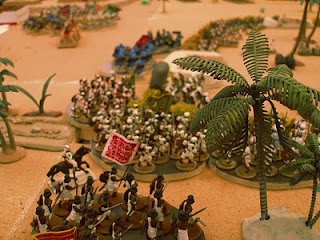 The Dervish warriors attack the zariba and, in the background, the Arabs prepare to assault the gate area.  In the foreground, a unit of Beja warriors await their turn to make an assault.

The Egyptian platoon has fled from the gate area after taking heavy casualties.  A gun lies abandoned while its gunners man another gun in the artillery emplacement to the left of the gate.  Arab  warriors stand ready to attack the abandoned gate. 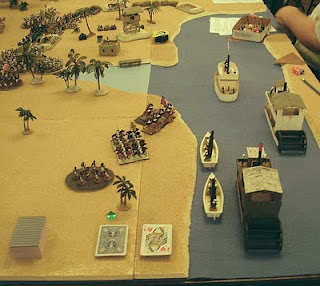 A view of the riverine relief force as it prepares to turn into the landing and disembark its Royal Marines and Naval infantry.  Some of the Beja and Dervish warriors got a little to close to the water's edge and were punished severely by the Gatling and Nordenfeldt machineguns on the gunboat and the steam launches. 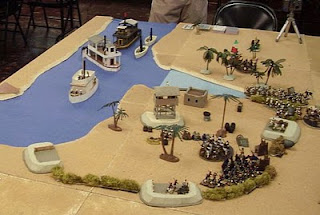 A unit of Arabs has penetrated through the gate, followed by a second unit which is trying to attack the rear of the Sudanese defenders.  In the background, the lead transport turns into the landing to disembark its infantry.  You can also note that the Dervish and Beja units in the previous picture have been sent fleeing. 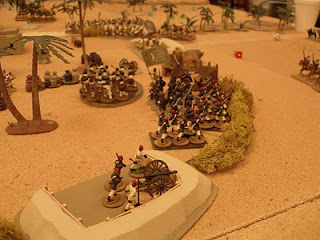 A slightly different view of the Arab penetration of the zariba gate.  The Sudanese have successfully turned to face their attackers and will repulse them after some hard fighting.  To the far left, the remnants of the Egyptian platoon have been rallied by the garrison sergeant major and are forming to engage the lead Arab unit. 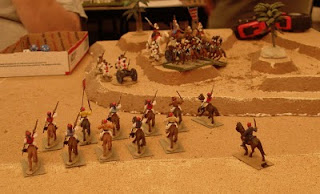 While all the fighting is going on around the zariba, the Egyptian cavalry arrives on the battlefield.  Although the Egyptian lancer troop was destroyed by the fire of the Dervish guns, the mercenary Baluchis and Bashi-Bazouks are attempting to avenge their comrades and overrun the guns.  The Baluchis will get right up to the muzzle of one of the guns before they are blown from their saddles by the unusually accurate fire of the pressed gunners.  The Bashis also will not be able to stand the severe pounding and will withdraw. 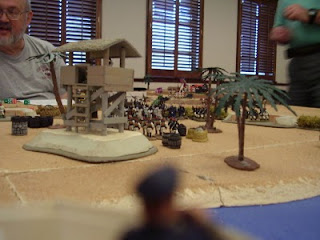 Captain Harrington, the commander of the riverine force, gazes into the fighting within the zariba as his gunners search for lucrative targets.
For the actual convention game, I will adjust the native deployment, simplify the boats movement and turning characteristics, and make a few other minor adjustments.  The game will be a race between the natives trying to break into the zariba and destroy the defenders and supplies and the riverine force trying to get their Royal Marines, Naval infantry, and Gatling guns landed to come to the rescue.  It should be a fun game that will go right down to the wire.
Posted by ColCampbell50 at 8:22 PM 4 comments: