In preparation for our upcoming Gulf-South regional convention (Bayou Wars), Col Campbell ran his Gallian (French) and Indian War game this past Saturday.  Eight of us met to do battle amongst the forests of the New World.

The Gallians had, several years earlier, built a small fort to guard the route through the Fondue Pass.  Set astride Cheddar Creek, the Fort du Fromage was later abandoned and fell into ruin.  But further incursions by Britannia's 'Murican colonists sparked the Gallian Governor-General of Canadie to send an expedition to refurbish the fort.  Commanded by le Compte de Argent, it consisted of his regiment (the Regiment Beaujolais, with two companies of fusiliers, a company of grenadiers, a detachment of picquets, and a battalion gun), a battalion of two companies of Compagnies Gallien de la Marine, a battalion of three companies of Canadien militia and a battalion gun, and a double warband of Allied Huron Indians.

We used The Sword in the Forest variant of the venerable The Sword and the Flame rules.  With the exception of the companies of the 15th and 60th Foot (owned by Doc Ord), all figures are owned and painted by Col Campbell.  Unless otherwise indicated, all pictures were taken by Col Campbell.  Please click or double-click on each picture for a larger image.

The area of the Pass of Fondue, with the ruins of the Fort du Fromage in the center, bisected by Cheddar Creek.  The Gallians entered on the right edge (north) and the Britannians entered on the left edge (south).  The two hills (near and far) delineate the Pass of Fondue.  The woods were considered rough terrain as were both wooded hills and the ground inside the ruins of the fort. 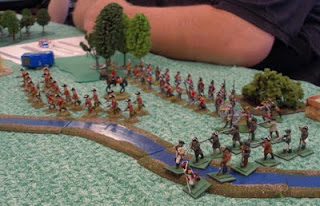 The Gallian Regiment Beaujolais, commanded by le Compte de Argent, advances towards the ruins of the Fort du Fromage.  The picquet detachment is on the right while the two fusilier companies and the battalion gun advance through the gap in the woods.  The grenadiers are slowly moving into the woods on the left.

Two of the three Canadien militia companies and the battalion gun of the battalion commanded by Major Phillippe Jeune advance towards the western Hill of Fondue.  Major Fondue is encouraging his men from the rear by waving his hat! 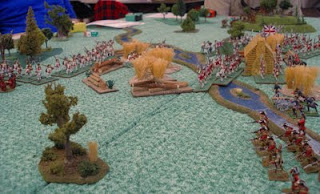 A broad view of the center of the pass with the ruins of the Fort du Fromage being contested by the Regiment Beaujolais (left) and the 5th Foot (right) who are supported by the 15th/60th Foot (foreground). 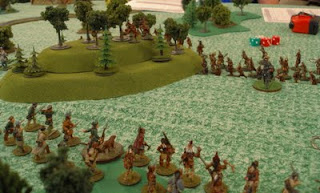 On the east end of the pass, the combined Ranger and Allied Indian company of Major Pitts (the younger) face off against the two Gallian allied Indian warbands of Chief Schneider, an Alsatian-Huron warrior of great renown.
The Britannian 5th Foot advances into the ruins of the Fort du Fromage.  The grenadiers quickly occupy the remaining building of the old fort but find nothing except abandoned animal nests for loot.  In the background are elements of the Regiment Beaujolais and the Compagnies Gallien. 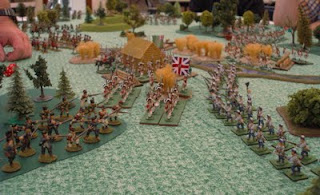 On the east side of the fort's ruins, Major Pitts' other Ranger/Light Infantry company protects the right flank of the 5th Britannian Foot as they oppose the advance of Major Jacques Argile's Compagnies Gallien. 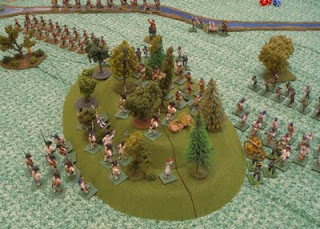 Back on the west side of the pass, Major Jeune's Canadien militia face off against Col Campbell's 'Murican provincial militia on the west Fondue Hill and along the low ground to the right.  The opponents on the hill traded volleys for several turns.
The command of Lieutenant Colonel Sansing also advances against the western Fondue Hill with the provincial light infantry and the company of the 15th Foot in the lead, supported by the company of the 60th Foot.  The grenadiers of the Regiment Beaujolais are lining the woods in the right rear of the picture.

Chief Schneider's Indians suddenly charge the Rangers and Allied Indians of Major Pitts.  Although one of Chief Schneider's warbands failed to close, the other did and a hard-fought melee ensued.  Clubbed muskets and tomahawks mashed and slashed among the combatants.

Major Argile's Compagnies Gallien trade volleys with the 5th Foot and Major Pitts' Rangers/Light Infantry, while in the center of the fort the other half of the 5th Foot slowly closes with part of de Argent's Regiment Beaujolais. 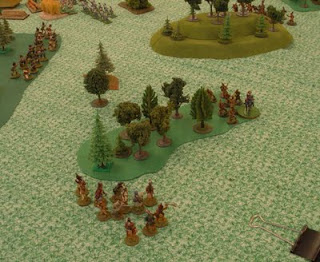 In the center of the picture, Chief Schneider's Indians celebrate their victory over the vaunted Rangers of Major Pitts, who have with drawn in confusion (foreground).  In the background, the other warband huddles in the protection of the eastern Fondue Hill.  The next turn, Chief Schneider's Indians were awarded the first movement card, charged the confused Rangers before they could rally, and drove them from the field.
Chief Schneider's victorious warriors realign themselves for further action against the Britannians.
Chief Schneider hopes to engage the other part of Major Pitts' command of Rangers and Light Infantry who are covering the right flank of the 5th Foot. 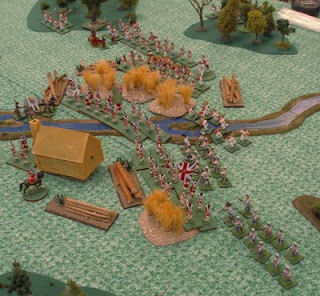 In the ruins of the fort, the Britannian 5th Foot continues to trade volleys with elements of the Regiment Beaujolais and the Compagnies Gallien.
In the far background, one of Major Jeune's Candien militia companies tried to charge, failed to close, and had to withdraw.  Just to the left of the western Fondue Hill, another of Major Jeune's companies, supported by a battalion gun, trade volleys with one of Col Campbell's provincial militia companies.  On the right the Britannians mass to assault the western Fondue Hill. 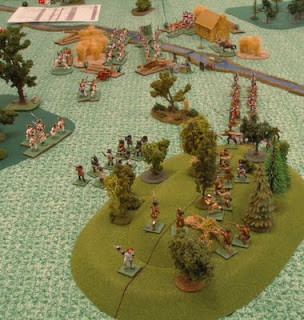 The combined Britannian assault of Col Campbell's provincial militia and Lieutenant Colonel Sansing's provincial light infantry succeeds in driving Major Jeune's Canadien militia off the hill, leaving only Major Jeune himself, forlornly waving his hat at his departing troops.  Sansing's provincial light infantry now turns their attention to the grenadiers of the Regiment Beaujolais.
The 5th Foot succeeds in holding their own in the fort's ruins against the Regiment Beaujolais.  On the far left are what remain of one of the two fusilier companies of the Regiment Beaujolais, as well as their battalion gun with its crew lying dead around it.  The 5th Foot's battalion gun, as well as the company of the 60th Foot (out of picture to left) were the dealers of death and destruction in this area of the battlefield. 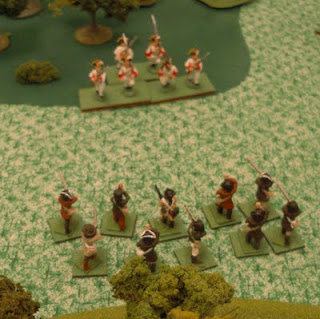 One of the final actions of the day involved Lieutenant Colonel Sansing's provincial light infantry trading volleys with what was left of the Regiment Beaujolais grenadier company.
As darkness fell, le Compte de Argent decided that he was too weak to continue the action and his Gallian regulars, Canadien militia, and Huron Indians melted into the woods, leaving the bloodied Britannains in charge of the ruined Fort du Fromage and the Pass of Fondue.
All in all, the game went well and appeared to be fairly well balanced.  Some better dice rolls on the part of le Compte de Argent might have resulted in a victory for the Gallians.
Additional pictures may be found on Big John's Nomadic Old School Gamer blog (link is to the upper right, under "Member Links").
Posted by ColCampbell50 at 6:48 PM 2 comments: