Battle of the Yellow Sea

A small group of the Jackson Gamers met Saturday last (Nov. 6) at Fondren Presbyterian Church to play a recreation of the August 1904 Battle of the Yellow Sea.  We used Jim Pitts' 1:2400 scale Panzerschiffe models of the Russian and Japanese ships involved in the battle.

Jay Stribling  and Ed Sansing commanded the Russian 1st Pacific Squadron as it attempted to break out from Port Arthur and sail to Vladivostok.  John Murdaugh, Sean Pitts, and a late arriving Travis Melton commanded the Japanese Battle Squadron.  We used a pre-dreadnought modification to Travis' Seas of Steel rules.

The Japanese 1st Division, four battleships and two armored cruisers, was commanded by John.  They steam towards the approaching Russians.

As the Japanese battleline changes course, eight Japanese destroyers and four torpedo boats increase speed to get into the fight.

The Russian battleships (foreground) and the Japanese cruisers (background) begin to exchange salvos.

Russian and Japanese destroyers begin to tangle with each other while the Russian  battleline sedately continues on its course.  Off to the left (out of the picture), John splits his Japanese 1st Division, sending three battleships to the right and one battleship and two armored cruisers to the left to attempt to pincer the Russian line. 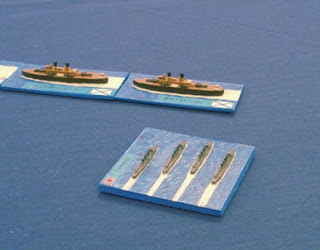 Under heavy fire from the Russian quick-firing guns, a division of Japanese destroyers attempts to launch their torpedoes.  But the fish miss their target.  The destroyers are later completely wiped out. 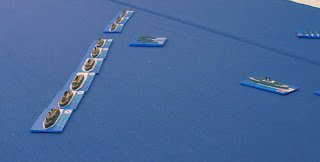 Here is another shot of the Russian battleline with Jay's battleships in the lead and Ed's cruisers in trail.  The lead battleship in John's right column (the Mikasa) is approaching from the right. 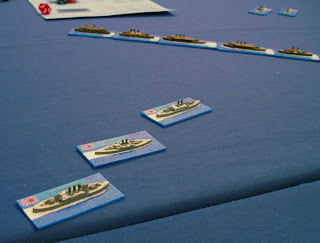 With his three battleships in echelon, John closes with and exchanges fire with the Russian battleships.  John's other three ships are off the picture to the left, heading to cut the Russians off from the Straits of Korea. 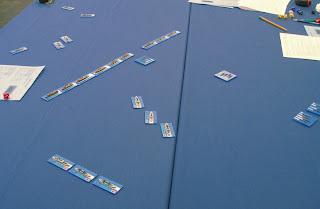 This is a high oblique view of the battle.  Sean's Japanese cruisers are to the upper left with the furtherest two leaving due to severe damage.  Jay's and Ed's battleships and cruisers hold their line ahead formation in the center while John's battleships and armored cruisers close in two separated three ship groups.  The destroyer action is already over with one division of Japanese destroyers unsuccessfully attacking the Russian battleships.  Two divisions of Russian destroyers are just departing the picture on the right, heading towards the Japanese 5th Division which is approaching from the right.  These five older (and obsolescent) ships were commanded by Travis. 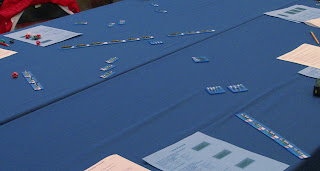 From a different angle, Travis' Japanese division can be seen approaching from the bottom of the picture.  He commanded four older Japanese protected cruisers and a captured Chinese "battleship" (the Chenyen).  They were able to sink the threatening Russian destroyers but didn't contribute much to the rest of the battle. 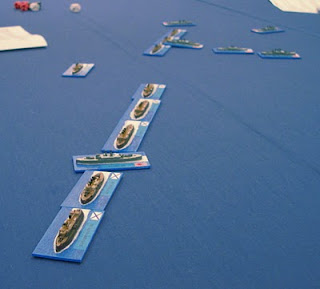 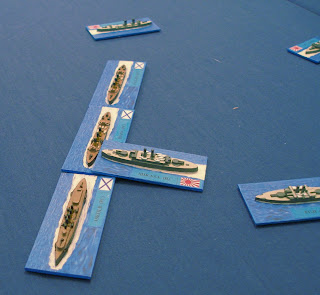 Here's a closer view of the collision between the Mikasa and the Diana.  The Russian cruiser suffers much more damage than the Japanese battleship, but both are out of the action for a while. 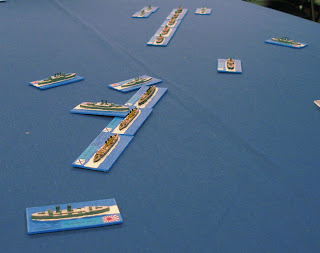 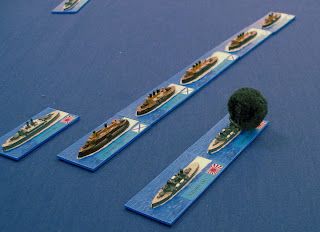 Suddenly a plume of black smoke erupts from the Japanese armored cruiser Kasuga.  The rear main magazine has taken a hit!  It is not enough to blow up the magazine but the rear main gun turret is put out of action. 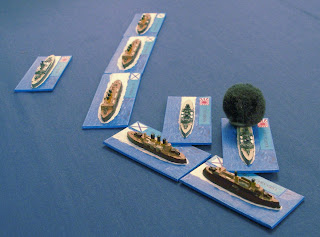 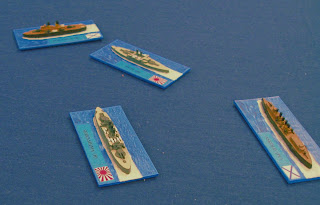 Meanwhile to the rear, two of John's Japanese battleships engage Jay's trail Russian battleship and Ed's lead Russian protected cruiser.  The range is pointblank and neither side seems to be missing much. 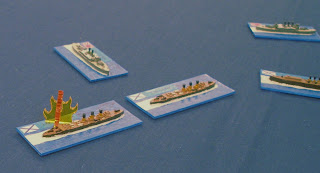 Under fire from John's Mikasa and one of Sean's cruisers, the trail Russian cruiser (Pallada) is set on fire.  The Russian crew works furiously to put the fire out.  Will they be successful? 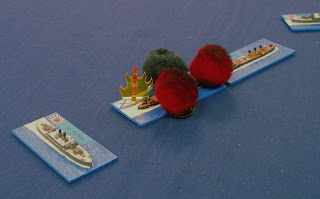 No they won't.  When the Mikasa crosses the stern of the Pallada, its shells strike deep into the vitals of the Russian protected cruiser and he blows up! 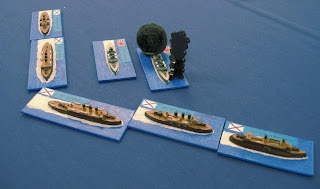 But Jay returns the favor and smashes the Japanese armored cruiser Kasuga, convulsing her with explosions that send her to Davey Jones' locker!
After examining the situation and considering the lateness of the hour, the game master (Jim Pitts) computes battle damages.  Both sides have inflicted the same number of points in battle damage to the other, but Jim rules that the Japanese tactics of splitting their main battleline into two elements was unsuccessful against the Russian tactic of staying in a single line ahead.  He adjudges that five of the six Russian battleships will be able to make it to Vladisvostok.  The sixth battleship and one of the two surviving Russian cruisers are too surrounded by the Japanese and will probably either succumb to Japanese guns or be forced back to Port Arthur.  The other Russian cruiser is positioned to break away to the south and likely seek internment in a neutral port.  The Russians are awarded both a tactical and a strategic victory.
Posted by ColCampbell50 at 2:17 PM 3 comments:

The Rest of the Baltic Fleet

We had a good game on Saturday.  Pictures and commentary will be posted later this week.
Posted by ColCampbell50 at 1:45 PM No comments:

Please see John Murdaugh's blog, Nomadic Old School Gamer (link to right), for pictures and a report of the game we had at Jay's on Saturday.  We used John's self-cast, individually mounted 40mm 18th Century figures in an "old school" environment.  We had a lot of fun.  We'll do this again on Saturday, November 20th.