The Sword in Africa

On July 18, the Jackson Gamers gathered in the Fellowship Hall of Fondren Presbyterian Church for game using Larry Brom's The Sword in Africa rules. These rules are based on his venerable The Sword and the Flame but use 8-10 figure units and various types of "event" cards. Jim Pitts was the game master. He also painted all the troops and constructed the terrain.

The overall scenario involved stalwart British led askari, valiant native warriors, devious Zanzabari slavers, and disreputable Ruga-Ruga bandits. The Ruga-Ruga have captured some villagers who are to be sold to the local Zanzabari slave factor. The villagers' chief is out to rescue his subjects and the British askari are there to punish all malefactors, whomever they may be.

In the picture below, the players examine the board, their forces, and their specific objectives. [As usual, please click on the pictures to see an enlarged version.] 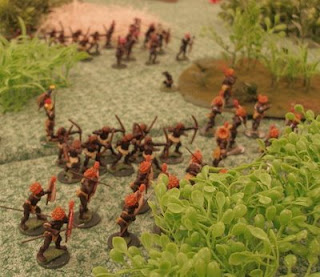 Native warriors advance through the bush. Here they have encountered a mad holy man (squatting in the center by edge of a clump of brush) who delayed their advance while they persuaded him of their good intentions.
The villagers have appealed to the local tribal chief for help in rescuing their people. He is leading a force of warriors to assault the Ruga Ruga compound and rescue the villagers. The chief knows he must wipe out the Ruga Ruga if he is to have any peace in his land and must show the Zanzabari slave factor that it is not worth it to try to procure slaves from his peoples. The chief also doesn’t completely trust the district commissioner but won’t interfere if it appears the white man’s soldiers are out to punish the Ruga Ruga or Zanzabaris. But if he sees that they aren’t controlling themselves or any of the other whites then he may not feel so accommodating. He is also wary of any other whites who happen to be in the area, not trusting them as far as he can spit. 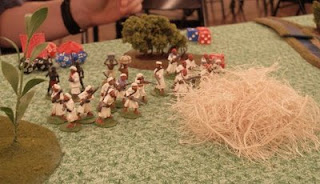 Meanwhile the Zanzabari slave factor has received word that the Ruga Ruga have some slaves for him and is marching to their compound to buy them. He doesn’t really trust these bandits and is prepared to fight them if necessary. He knows that the local tribal chief may try to rescue them and wants to get the captives from the Ruga Ruga and back to his fort as quickly as he can. Their goal is to purchase the captives and get them back to their fort (located off the table) as quickly as possible, all the while avoiding rescuing natives or Government troops. 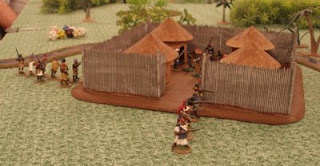 The Ruga-Ruga compound.
The Ruga Ruga have raided a small village, taking some of the villagers captive to sell to the local Zanzabari slave factor. They are holding the captives in their compound. They have sent word to the local slave factor and expect his arrival at any time. But they don’t completely trust the Zanzabaris, knowing that they will try to cheat them of their payment. They will defend their captives against anyone who tries to take them away. 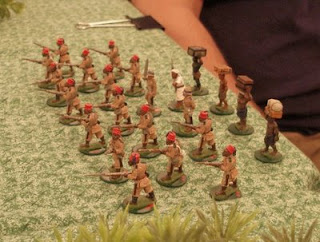 The British led askari column moves toward the Ruga-Ruga compound.
The jungle grapevine has brought word of the raid to the district commissioner of the raid and impending sale of captives. He has dispatched a small column of Askari to intercept the sale, free the villagers, and punish the malefactors, whoever they may be. The column commander doesn’t really trust any of the locals, be they tribesmen, bandits, or slavers. As far as he is concerned, the only good local is a dead local.

The rules include a series of event cards that govern mystical, terrain, animal, etc. events that may impact the missions of the various forces. They came into play frequently and resulted in some hilarious and not so hilarious events. 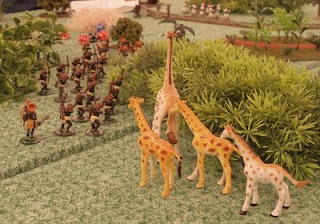 Here a small herd of giraffe investigate the native warriors who wisely are moving away from their hooves. (Plastic giraffes from a toy animal tube.)

Somehow the natives set fire to part of a clearing and had to hot-foot it out of the way of the flames. Somebody probably dropped his ganga stick. The fire burned for several turns and prevented anyone from entering the clearing. 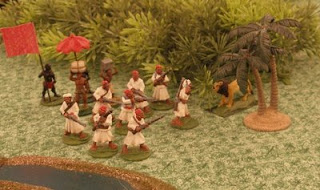 The Zanzabari encounter a lion as it bursts from the bush. But the unit leader drops it with a well aimed (and lucky) pistol shot, earning him the acclaim of his troops.
This event happened shortly after the senior Zanzabari leader had been killed by a snake that dropped on him from a tree. 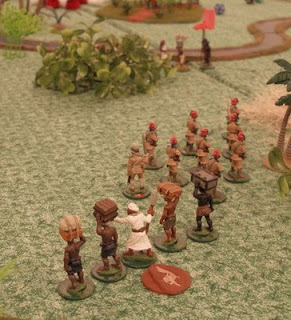 The askari discovered a strangely marked stone and the column commander made his bearers pick it up and lug it along with them, in addition to the loads they already had. 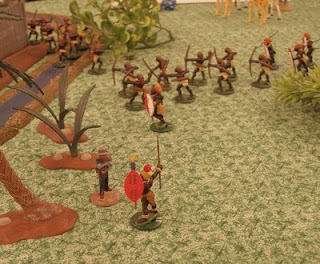 As the natives approach the Ruga-Ruga compound, their leader is accosted by a lost white missionary who was revered by both whites and natives. But since they couldn't understand each other, he wandered off without any impact.

When the senior Zanzabari leader died, one of his units ran away after they heard that the other unit's leader (the one who killed the lion) would assume overall command. But they returned later and encountered a native spear unit. The natives charged but the resultant fight saw two natives captured (on right) and the rest killed.

Native and askari units close on the Ruga-Ruga compound as the defenders withdraw inside.
[The compound was hand built and the huts inside are paper mache bird house decorations obtained from Michaels.] 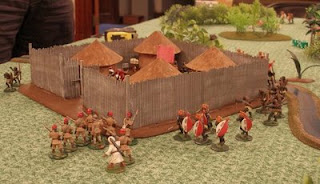 Just because the Zanzabari leader had killed a lion didn't make him Superman. Here he is after loosing a melee to the natives who then transferred him to the askari for punishment.

The natives have set fire to a corner of the compound, hoping to smoke out the Ruga-Ruga and rescue their fellow tribesmen. The askari are waiting to shoot whoever comes out of the gate! 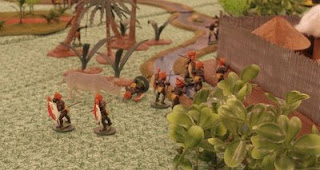 On the back side of the compound a native unit encounters a rare white rhino.
Several of them die of fright and several run away. The rest scatter from the horns of the mystical beast. 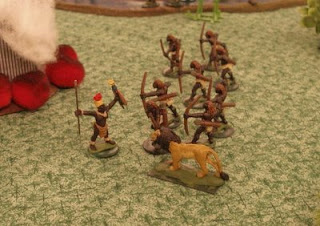 Suddenly another lion bounds out of the bush and heads directly to the senior native leader who welcomes the encounter with open arms. 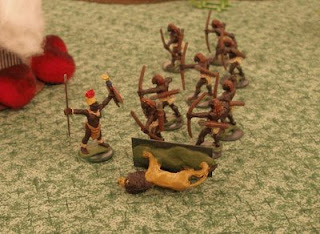 And moments later, Simba lies dead with a spear through his heart. All the natives rejoice at the tremendous courage and fearlessness of their chief. Surely this will be a good omen for their cause!
And a good omen it was. The Ruga-Ruga attempted to break out of the compound but were gunned down by the askari and then close-assaulted by the native spearmen. All but two or three of the bandits were killed and those few fled into the bush with the natives in hot pursuit. The villagers were rescued from a fate worse than death.

The British led askari took the captured Zanzabari leader back to the district headquarters where he was hanged as a warning for all would-be slavers.

The other Zanzabaris swiftly headed back to their fort with the two native warrior captives. At least they got a small return on their investment.
Posted by ColCampbell50 at 12:42 PM 1 comment: