We’d been hit hard these past two weeks.  What had been the entire Second Argyle Highlanders regiment protecting the planet has been reduces to just a single lance.  Forced to hide out in the desert, we thought we’d been lucky to find this abandoned germanium mine.  Walled in and located in fairly defensible terrain, we hunkered down to wait for reinforcements, or, if worst came to worst, make a valiant last stand for Prince and nation.

It started at 0837.  That’s when we first detected the short company on long range sensors.  By 0900 we knew that it was more than just a patrol as the started entering visual range. 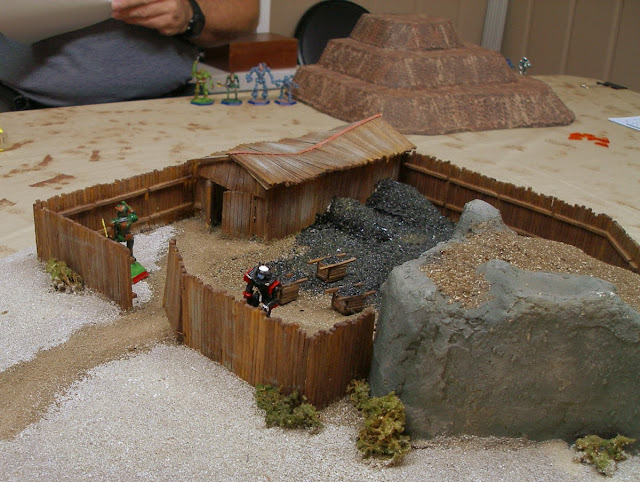 The Lyrans were smart.  They came in from the Southwest, well away from the front gate to the mine complex.  Leftenants Dan Linkan and Markus Nesevo had departed to do a patrol to the north and east to see if they could catch any flankers, leaving Captain Sir Nevel Kingston-Brown and Leftenant Jeff Nemo to guard the complex itself. 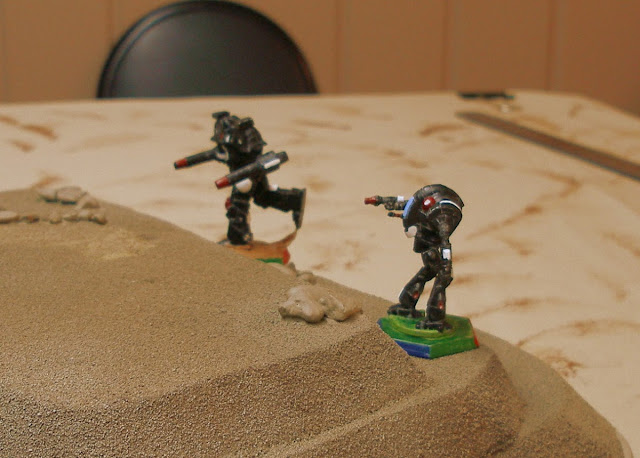 Leftenants Dan Linkan, in a DVS-2 Devastator, and Markus Nesevo, in a CES-3R Caesar, return from a patrol to find the mine under attack.

Now, Captain Kingston-Brown was no fool.  He knew the only thing that would allow his 'Mech’s to stand up to twice their weight in enemy ‘Mechs was the wall surrounding the complex.  That, and some good-ol’ Davion fire discipline, allowed the two of them to blunt the enemy’s charge and even knock out the lead ‘Mech. 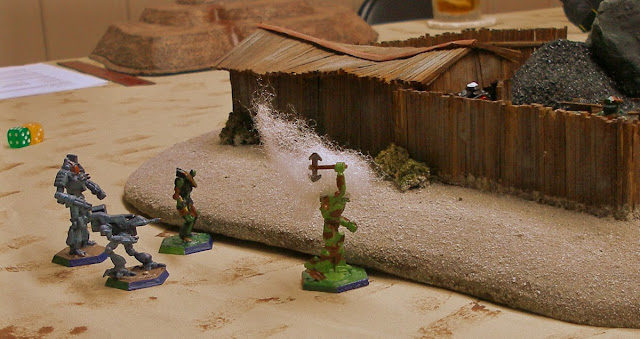 Hauptmann Ulffson’s Axman is the first, but not the last, casualty of the day.

But that’s when things started to go downhill.  We got word from Markus and Dan that they hadn’t start moving yet – apparently they overestimated the max range on the gauss rifles their ‘Mech’s carried.  Then we heard the unthinkable: Jeff’s ultra AC had jammed, the deep thunk of the machine’s ammo feed failing seemed to reverberate throughout the battlefield.  Thinking himself done for, the boy then leapt out of the compound straight into the enemy formation.  Even tried to do a Death From Above on one of the enemy.  Too bad he failed.  Coulda won us the battle right then. 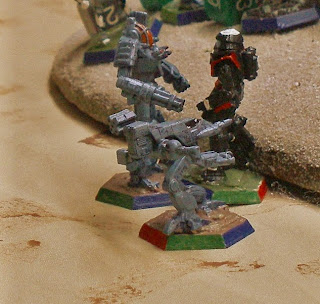 Then the Lyrans started getting the idea to jet their own jump-capable ‘Mechs in the base.  First off was one of those little Hatchetman.  Tried to engage Sir Nevel in close combat.  Guess he didn’t count on a Triple-Strength Myomer enhanced sword slicing his ‘Mech neatly in half. 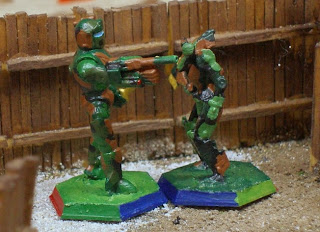 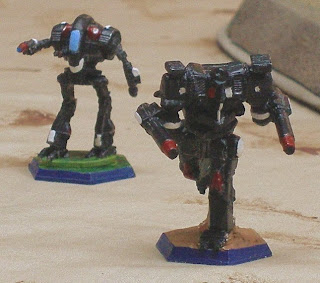 Meanwhile, the other half of the Davion force races – as much as a 100-ton ‘Mech can race anyway – to join the battle.

And that’s when Jeff fell, his entire torso completely destroyed by the combined firepower of the rest of the Lyrans. 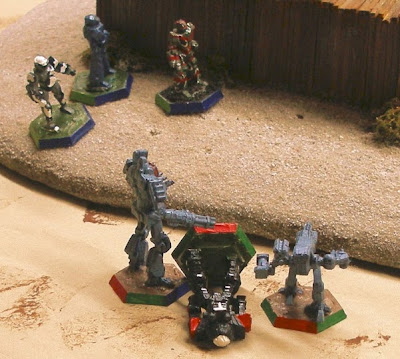 Jeff Nemo’s Victor falls over, just as the Lyran lights join the fray.

The Lyran Wasp and Stinger jump into the mining compound… 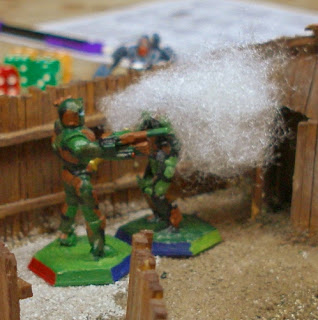 Just in time to see the Hatchetman bite the dust. 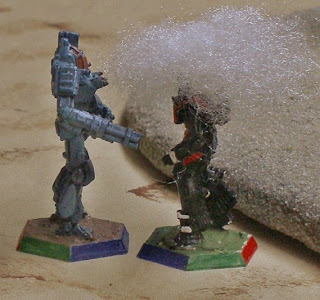 I guess it was then that Sir Nevel got a little flustered, and the three Lyran lights managed to get shots at his rear armor.  Now, his head had already been hit earlier, stripping it of its armor and damaging the sensors, but then one of those little guys managed to hit what was left, and, well… 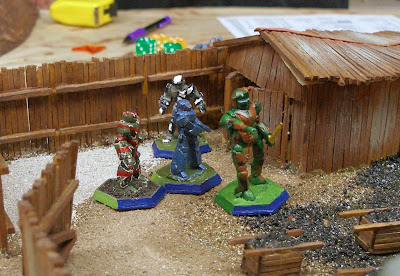 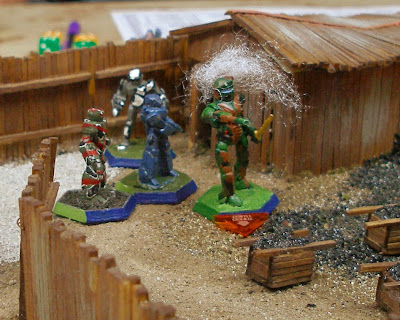 I thought it was all over when Sir Nevel died, and the Lyrans began shooting at the mine entrance, collapsing it.  But that’s when we heard the unmistakable sound of Gauss rounds and PPC bolts overhead as the big boys got into the fray. 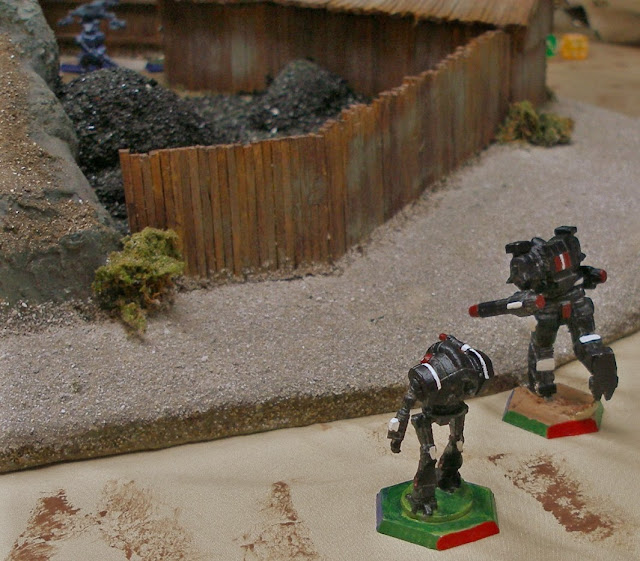 
Now, I don’t need to tell you what happens when a 100-ton Devastator attacks a 20-ton Wasp.  I’m pretty sure that thing’s arm flew a good kilometer or so before it landed.  PPCs and gauss rifles can take three lights apart pretty quickly it seems, especially because they decided to go after some mine skips fulla ore rather than skedaddle like bugs should when a big boy comes to play.  I guess that the Lyrans didn’t have too much fight in ‘em after that.  Their last two machines, a Bushwacker and what looked like a modified Battlemaster, had been worn down by trying to deal with Sir Kingston-Brown and Leftenant Nemo and they suddenly found themselves facing two pristine ‘Mechs, both armed with gauss rifles.  Started retreating right then and there, though Leftenants Nesevo and Linkan didn’t even bother trying to chase ‘em down.  Guess they were too worried about Sir Nevel to put any thought into the catching them.
Posted by ColCampbell50 at 4:03 PM No comments: