Larry Reeves ran a 15mm Napoleonic game for us at Jay's house last Saturday.  It was set in early 1813 before the summer armistice.  Seven gamers (4 French, 2 Prussian, and 1 Russian) vied for victory's laurels.  I think at the end of the day that the French were declared the victors, but the Prussians and Russians conducted a fierce defense.  The cavalry battle in the center went on for almost the entire game.  Jay is working on a battle report and it will be on the Jackson Gamers web site in the near future. 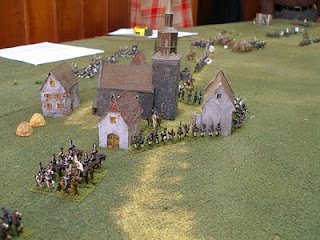