Many members from the Jackson Gamers made our annual trip to New Orleans to participate in the Bayou Wars gaming convention on June 11-13. We also competed with other gaming groups in a gaming competition. The Bayou Wars staff asked each group or club to run 5 games during the weekend. The games were judged and last week we were told we had won the competition. Next year at Bayou Wars our game masters each get a free hot dog!

I ran the first game, a space ship battle based on the Honor Harrington universe. I used the Full Thrust rule set and modified it to fit my needs. 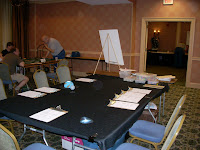 Here is the set up for my game. 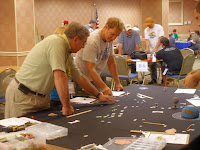 Early in the game I am working with one of the Peoples Republic players as he leads a raid into a Manticore controlled system.

The Manties were able to win this when they destroyed a heavy cruiser for the loss of a destroyer.

Our next game was run by Mark Stevens. He ran a Sikh wars game using the Sword in the Punjab variant of the Sword and the Flame rule set. 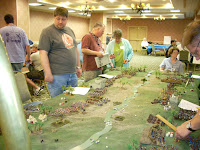 Here is the set up for his game. Mark is in the maroon shirt. 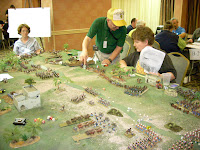 Late in the game. Jim Pitts confers with Martha Stevens.


Saturday morning Jim Pitts also ran a colonial game using The Sword and the Flame. Jim's game was the relief of the garrison at Wadi Zoum Zoum. 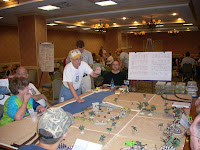 Here is Jim giving instructions at the start of the game.


The garrison, at the wadi can be seen in the middle of the table. 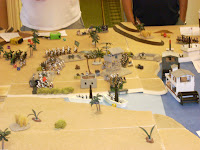 Near the end of the game, British reinforcements have arrived by steamer and are able to hold the garrison.

Our fourth game was by Jay Stribling. He ran a Spanish-American naval battle using his own rule set. 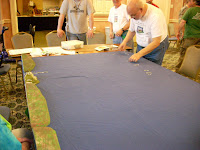 Here is Jay setting up the game. The Spanish had to break out of the port and run along the coast to try and get away from the American blockade. The Spanish commander was able to get 3 ships away which was a major victory for them.


Our fifth game was run by Bill Hamilton. It was a Victorian Sci-Fi game using Aeronuf miniatures and using his own rules. It had a lot of players was was well liked. Unfortunately I didn't get any pictures of this game.

Other Jackson Gamers ran games that were not part of the competition. Overall we had an excellent time at Bayou Wars and are looking forward to next year.
Posted by majed4385 at 7:53 PM 3 comments:

Play Test of "Remember the Maine and to He** with Spain"

Today several of us play tested Jay's Bayou Wars game, Remember the Maine and to He** with Spain!.  Jay has modified Travis' Seas of Steel WW2 naval rules to accommodate the much less technological pre-dreadnought ships of the American and Spanish navies.  Jay also made some equalizing changes in both naval orders of battle, especially the Spanish.  Jay's game will be on Saturday afternoon at 2:00 pm. (Convention schedule and details at the Bayou Wars home page.)

Remember, please click on the pictures for a larger image.

We played the scenario through twice as it went very fast!  The first play through was the original orders of battle:  the Spanish four cruisers and two torpedo boat destroyers versus the Americans four battleships, two cruisers, and two armed yachts/torpedo boat destroyers.  All ship models are 1:2400 scale and are from Panzerschiffe's Spanish-American War range (link). 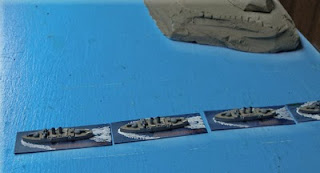 The Spanish cruisers (Maria Teresa, Almirante Oquendo, Viscaya, and Cristobol Colon) break out of the harbor of Santiago de Cuba. 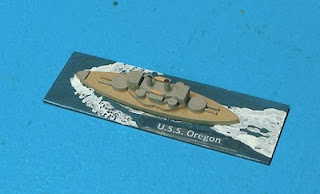 The USS Oregon quickly gets underway in pursuit of the Spanish squadron.  Even though she had speed-sailed from the Pacific, she was the most combat ready of the American ships. 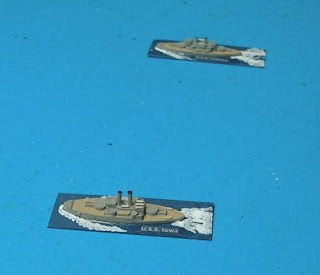 The Uss Iowa and the USS Indiana slowly get underway. 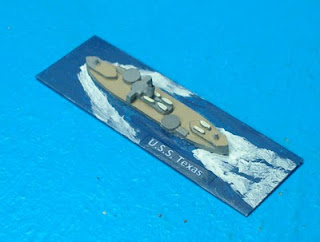 The older coast defense ship USS Texas (or a reasonable facsimile thereof) slogs away from her anchorage.

The four Spanish cruisers speed away from the American ships.  It is every captain for himself and the Devil take the hindmost!

The cruiser USS Brooklyn leads the USS Texas and the USS Oregon after the fleeing Spanish ships.  While the Oregon was at full speed, the  Texas and the Brooklyn were never able to gain full speed. 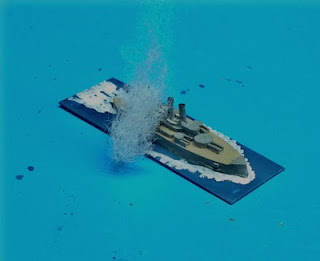 What's this?!?  A torpedo hit on the USS Iowa!!!
A  Spanish torpedo boat destroyer was able to get close enough to loose a torpedo which actually struck its target before the destroyer succumbed to American gunfire.  The Iowa slowly began to take on copious quantities of water and the captain ordered, "Abandon ship!" 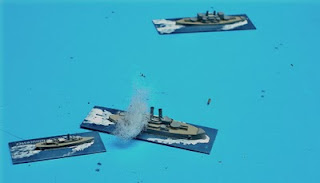 The USS Gloucester, with no more Spanish torpedo boat destroyers left, rushes to rescue the crew of the sinking Iowa. 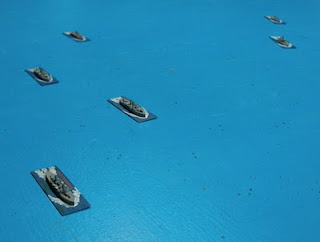 The Spanish cruisers get more separated as their different speeds begin to tell, as does the damage inflicted by the American gunnery. 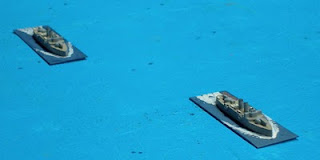 A closer shot of two of the Spanish cruisers, the Almirante Oquendo on the right and the Cristobol Colon (I think) on the left, as they flee from the Americans. 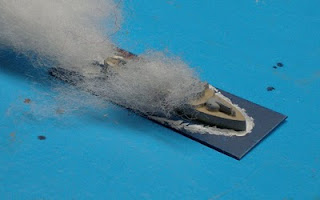 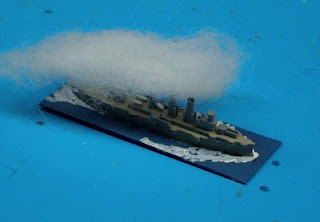 But the Spanish also draw more blood as they sink the USS Brooklyn which was leading the American charge and was the target for several of the Spanish cruisers. 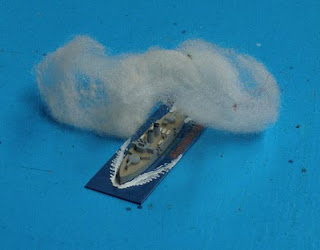 But the Americans get revenge, putting the Almirante Oquendo under the waves. 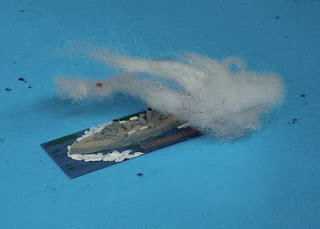 The Cristobol Colon is the next (and third) Spanish cruiser to be sunk. 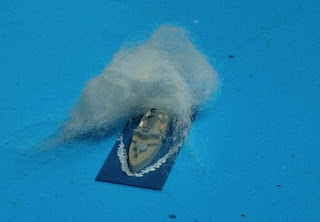 And finally the Viscaya joins her sisters in Davy Jones' locker.


Final results:  Spanish -- four cruisers and two torpedo boat destroyers sunk versus American -- one battleship and one cruiser sunk.
We then reset the game and add more Spanish and American ships.  The Spanish ships were the battleship Pelayo, two armored cruisers, an unprotected cruiser, and three torpedo boat destroyers.  The Americans added the USS New York, the USS Massachusetts, and a torpedo boat destroyer.  Could the additional Spanish ships swing the tide against the Americans?  Nah, not really.  The additional Spanish heavy ships were played by stand-ins as Jay had not received his order yet from Panzerschiffe. 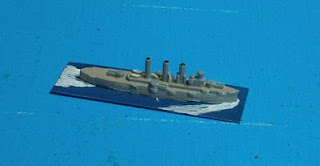 This was, I think, the stand-in for the Pelayo. 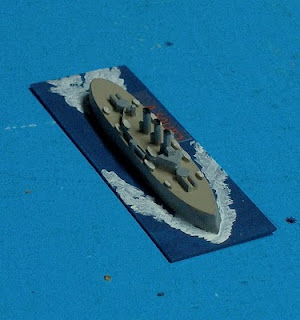 And here is the stand-in for the Carlos V, an armored cruiser.

The Spanish armada (strung out on the left) and the American fleet (on the right) make similar moves as the Spanish attempt to flee down the coast.  The Spanish torpedo boat destroyers tried to close with the American ships but were quickly blown out of the water before they came within torpedo range.

One by one, the Spanish ships were blasted to bits (two are shown sinking on the left) but the American cruiser Brooklyn was sunk again.  The lead Spanish cruisers ganged up on her.
Final results:  Spanish - one battleship, seven cruisers, and five torpedo boat destroyers sunk versus one American cruiser sunk.
So, lessons learned:  Even with the tweaks in increased gunfire ability and armored protection and in more ships, the Spanish were still outclassed by the American fleet.  Should the Spanish have tried to immediately close the range and engage the Americans in a close-range gunfight?  Maybe that's something for the Bayou Wars Spanish players to try.  One thing we did note was that the Spanish torpedo boat destroyers should be sheltered behind the bigger Spanish ships until the range is closer so they can try to get in torpedo range while the Americans have many targets for their secondary batteries.  When the TBDs try to close early, the Americans can shoot at them with the secondary batteries while the Spanish heavies are out of those guns range.
But whatever happens, it is a fun, quick game that might see two complete run-throughs Saturday afternoon.
Posted by ColCampbell50 at 7:15 PM 2 comments: