As some of you know I've been doing some genealogy research lately. One of the tools I've used is Find A Grave www.findagrave.com . This site has users create lists of cemeteries and then add graves and pictures. One lady here is central Mississippi has visited many cemeteries and created the sites but only added a few graves at each one.

On Memorial Day, Monday May 28th, I had some time and visited Forest Hill Methodist Church Cemetery. Since there were only 45 graves listed I knew there were more to be added. So I took my camera and went there. 3 of the graves really got me thinking about the meaning of Memorial Day.

The first was the grave of Jasper F. Basye. He was a 28 year old who served in the U.S. Army in World War 2. His grave stone reads - Jasper F. Basye, Mississippi, Pvt, 22 Inf, 4 Inf Div, World War II. His date of death was March 2, 1945. A quick search reveals that on that date the 4th Div. was making a river crossing at the time of his death. Not to long before the end of the war. 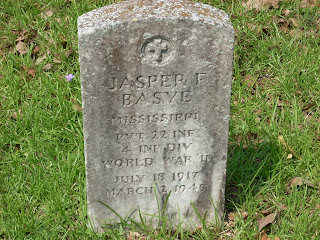 The next one that caught my attention was the grave of Robert C. Nails. He was a soldier in World War I. His grave stone reads - Robert C. Nails, Mississippi, Pvt, 28 Inf, 1 Div, May 28, 1918, Nobly he fell while fighting for his country.

Again I went to the internet (I don't keep all these facts in my head) and found that on that date the 1st Infantry Division made its attack (led by the 28th Infantry) on Cantigny, France. It took me a minute to realize that the attack and his death had happened exactly 94 years prior. His grave did not have his date of birth so I went to the MDAH website and looked up is Service Record. It had his age at enlistment as 17 years and 8 months. An awesome responsibility for one so young. 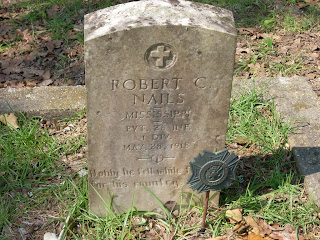 The last grave I noticed was right next to Robert's, it was his mother's. The inscription on Sarah Lenora Nails' grave reads - Hinds County's First Gold Star Mother. It reminded me that those who serve and pay the ultimate price leave loved ones back home. 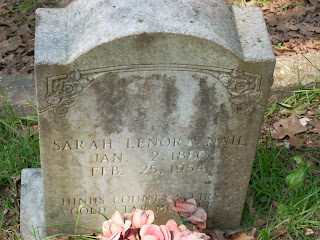 I did not know any of these people or their families. On this Memorial Day their graves caused me to think more clearly on the sacrifice of the military. I served 23 years in the Army and National Guard and never had to fire a shot in anger. I believe it was because of men and women like these.

I hope you had a happy, and thoughtful, Memorial Day.