The report of our game on Saturday, June 20, is now posted on my blog, ColCampbell's Barracks. Please drop by for a visit. The photo below is just a teaser. 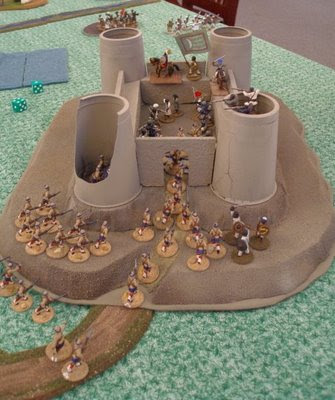 Highlanders assaulting the Haddabiera fort.
This is the scenario that I will be running at Bayou Wars on Saturday, June 27 at 9:00 am as te 2nd Annual George Carr, Sr. Memorial Colonial Game (and as a celebration of the 30th anniversary of The Sword and the Flame rules by Larry Brom.
Posted by ColCampbell50 at 1:23 PM No comments:

On Saturday, June 6 (the 65th Anniversary of the Normandy landings), we gathered at Bill Hamilton's house for an introduction to the Crossfire WW2 rules. The scenario was a meeting engagement between a small German force (two infantry companies commanded by Jay Stribling and Jim Pitts) and a small American force (two companies commanded by Phil Young and Sean Pitts). Bill Hamilton acted as the game master and rule guru.

As you can see from the photos below, the terrain was very close with a small village and many patches of woods. 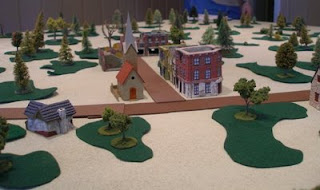 The movement in Crossfire is unusual in that a company may move its elements (platoons and squads) from terrain feature to terrain feature for any distance until it is either stopped by enemy fire, by inconclusive friendly fire, by failing to rally an element, or by the mover's choice. This lead to elements moving from woods patch to woods patch until they started receiving enemy fire. 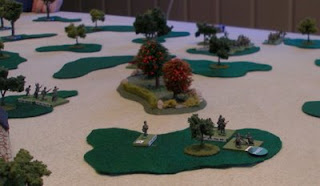 Then the action bogged down and the initiative flowed from one player to another very quickly. The Germans had a slight advantage in that their squads could move while out of sight of the platoon leader while the American squads had to be within the sight of their platoon leader or the company commander. 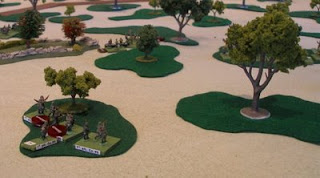 Getting your squads suppressed by enemy fire (see red markers above) meant that they could not move or fire until rallied. This caused some squads to linger in a suppressed state for a long time because if you tried to rally a squad and failed, then you lost the initiative to the opposing player. 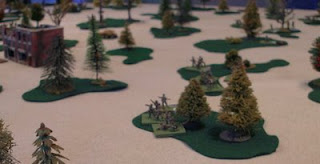 But gradually the Germans begin to wear the Americans down forcing them into a slowly constricting perimeter. Sean's American company was wiped out and Phil's had lost heavily by the time night fell and the battered Americans could slip away.

I can see this rule set being used for small scale actions in WW1, WW2, Korea, Vietnam, and modern conflicts. It was a fun game, especially since I was on the winning side (for a change!).

Pictures and report by Jim Pitts
Posted by ColCampbell50 at 12:38 PM 1 comment: 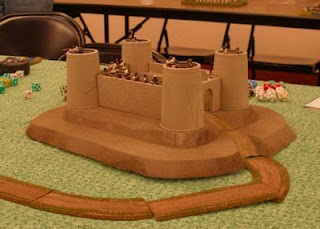 The Fort of Khalaam
Posted by ColCampbell50 at 1:45 PM No comments: