On Oct. 18, Jay Stribling treated us to a Renaissance game using slightly modified Fields of Glory rules. Using troops of Jim Pitts and his own, Jay set up a fictitious battle in northern Italy between the forces of the French king and the Holy Roman Emperor. Players were: 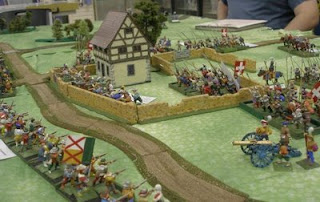 The center of the battlefield with the Germans of Jim Pitts
on the left and the French/Swiss of Jay Stribling
and Sean Pitts on the right. 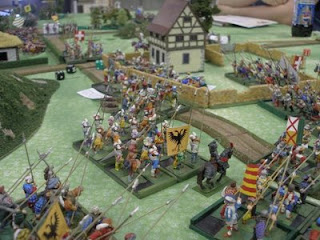 Jim's attack progresses against the French. 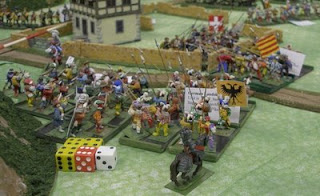 Final fighting in the center
So who won? Common consent was (if I remember correctly) the the Germans would win since they had collapsed the French left flank and penetrated the center, threatening the French baggage park. There is now a full report on the Jackson Gamers web site, see link to right.
Posted by ColCampbell50 at 2:10 PM No comments:

I've heard that all gamers, if they stay at it long enough, will look at units they have completed and decide to re-base them. I have now come to that point. I recently completed 2 Mex-Am War (MAW) Mexican regiments and Larry Reeves painted 2 more for me and I am wondering whether to change my method of basing. I have been using Wargames Accessories metal bases. What I plan on doing is using plywood on top to the base so I can put the name of the unit on the back so they are easily identifiable.
When I started my 15mm MAW army I based them in accordance with Fire & Fury rules. I used 1 x 3/4 inch bases for infantry. I mounted 3 figures per stand, since in F&F losses are by stand not by figure. Cavalry & artillery are on 1 x 1 1/2 inch stands. I used Musket Miniatures line and their packs have 24 figures each, so my units were 8 stands.
In the games we have played unit sizes have been, at the most, 6 stands, so I have toyed with the idea of re-basing the units 4 figures to a stand. If I do this I could also use these units with Brom's Standard rules for MAW.
What I am wondering is can I mount 4 figures on the size base that I have been mounting 3 without it looking to crowded? Here is a picture of a test. In the foreground is the new 2nd Lt. infantry, with 4 per stand, and in the background is the older 1st Lt. infantry, at 3 per stand. 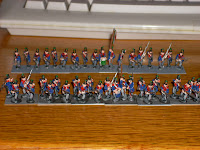 I am looking for comments on which unit looks best.

John Switzer treated us to another of his specialized games, this time "Mayhem in Plasticville." As Ed described in the previous post, the Zombies were loose! But that didn't phase Baron Samdhe and his gang of toughs. They knew the redneck motorcycle gang from the local trailer park would come calling. Nobody was going to horn in on their turf!

Here we see the Baron (in the middle in his voo-doo leader garb) and his peeps (from the left) - Shades, Rasta, the Kid (who defected to another gang), Stripes, Levi, Boomer, and Rainbow, the Baron's girl. 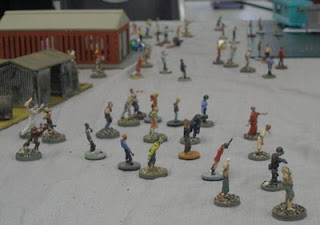 The Zombies are coming!!
"There's thousands of them, Mr. Rico!" 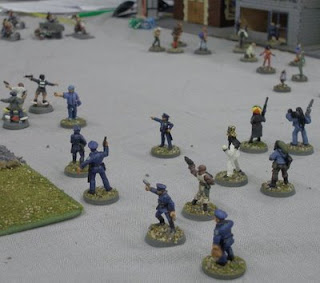 Leaving Stripes and Levi to hold the fort, the Baron and his troops advance into the street for a showdown with the motorcycle gang. Notice that the police are more interested in chasing the punks on the skateboards than worrying about what the Baron will do. 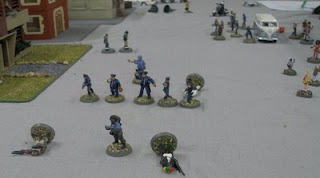 But things didn't work out too well for the Baron. After he and Boomer were killed by the bikers, his peeps wiped the bikers out. But there had been too much shooting for the police, so after all the Zombies had been dispatched, they turned on the Baron's boys and shot Shades and Rainbow in the backs. I guess Rasta, Levi, and Stripes will have to "discuss" who will take over from the late, unlamented Baron.

But maybe he will rise from the dead! You never can tell with those voo-doo practioners.
Posted by ColCampbell50 at 8:41 PM No comments: 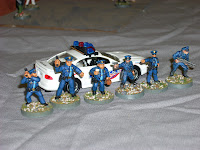 A picture of my group of cops from our Mayhem in Plasticville game last Saturday. They belong to John Switzer and were really well painted.
Posted by majed4385 at 8:10 PM No comments: