While at MilleniumCon last weekend, I played in a game using Ed Teixeira's new Two Hour Wargames rules Colonial Adventures. The scenario was titled "The Raid" and was run by Al Maurer of Askari Miniatures using his lovely North African colonial figures.

From the events list description: "Players take command of French Foreign Legionnaires conducting a raid of a Berber village. Can you find and capture the leader of the rebellion?"

Actually the players were divided into two groups, the French and the Berbers. Along with Bill Protz and two other gamers, I played as a Berber clan chief. We each had a unit of 20 Berbers armed with muskets (three units) or rifles (one unit). Our senior leader was hidden and the French would have to find him. Likewise all our units started out hidden as well.

There were four French players commanded three 20-figure units of infantry (one FFL, one Tirailleur Algerien, and one allied Arabs), one 15-figure unit of mounted troops (Chasseurs d'Afrique, I think), and a mule borne mountain gun.

The French clearly had the Berbers out manned and out classed. All of Ed's games use a technique known as a "Rep" to classify units, to determine when (and if) they can move and how well they fire. The FFL, gun, Tirailleurs, and cavalry were all Rep 5, meaning they could move when a 5 or less was rolled on a D6. The French allied Arabs and three of the four Berber units were Rep 4, while my unit was a Rep 5. There were a number of turns when none of the Berbers could move because we rolled more than a 4 or 5 on our D6 activation roll. 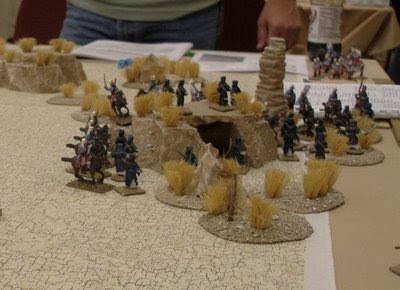 The first action involved Bill Protz's unit of rifle armed Berbers against the French cavalry around a rocky knoll with a cave in it. The melee lasted for several turns with the French losing heavily at first until the die rolling turned to their favor and gradually Bill's Berbers melted away and fled the table. The melee started when the cavalry sighted Bill's Berbers, who then fired. The cavalry then charged the Berbers and the melee ensued. All of these activities were determined by reaction die rolls, with the unit commanders having little to say in what their unit did. 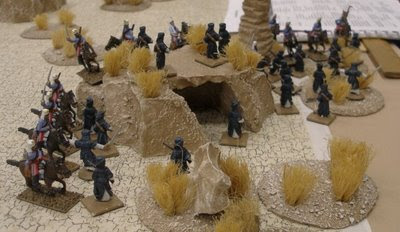 Here is a closer look at the melee. As you can see, the figures were nicely painted and the terrain was well done, all resting on a battle cloth of regular patterned fabric like Travis Melton uses. 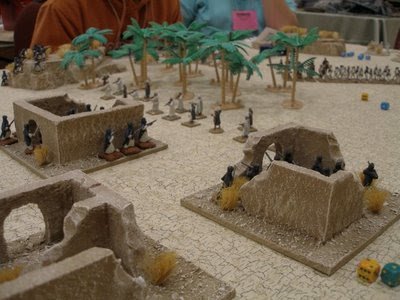 The main Berber defenses were around the ruined buildings with my unit (somewhat elite) occupying the two buildings on the right, another unit the building in the front center, and a third unit some rough terrain further to the left. The French allied Arabs were in a skirmish line that moved through the palm grove. It was gradually shot to pieces by the Berbers and either died or ran away. The units to the right of the palms are the mule gun and the FFL. the Tirailleurs are behind the palms on the far left and are hidden from view. The FFL were in close order line and could use a volley fire advantage which hurt my unit a little bit. 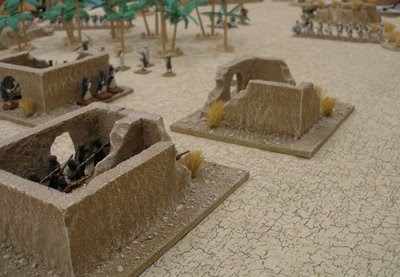 Because of casualties, I was forced to abandon the first building and retreated back to the second. Here I made my stand. Since I could only fire a few men out of each face of the building, I was normally only rolling 3 firing D6s, needing a 1 to hit anything. Needless to say, my abysmal die rolling resulted in fewer French casualties than I desired to inflict. 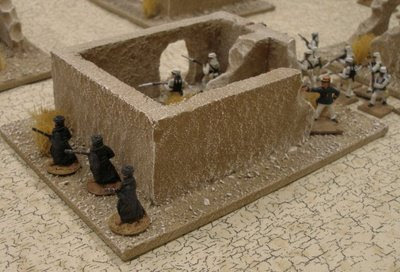 Finally the FFL assaulted my last stand building with cold steel. Although I killed a couple of them, they were too powerful for me to resist and so my last three guys (out of 20) ran away. I did kill one of the FFL leaders, but they also killed my leader in the melee. This completed my participation in the game, so I don't know whether the French were able to find our hidden leader.
OK, you ask, how did I like the rules? Well, they are advertised as a two hour game and we played about two hours before my unit fled and I left. But there were 8 players and we each controlled only one unit, except for one of the French players who controlled the FFL and the gun. With more units to control, the game would, I think, take longer. There were some errors on the quick play sheets that we used (note: each type of unit had its own, unique QRS with different results for the reaction checks.) so Al had to consult the rule book a number of times. It appeared that there wasn't enough quality control there. For the most part, once a unit is committed to an action, movement, firing, melee, the player tends to loose control over what the unit does. All actions are laid out in the reaction test tables and are dependent on passing die rolls. I'm not sure that I like loosing that much control, even though I've played in a number of games using various varieties of Ed's rules. Anyway, it was an interesting close to a long day of SYW fighting and I'm glad I got to experience these colonial rules. I doubt if I will get a copy as I'm pretty much a Sword and the Flame guy.
Posted by ColCampbell50 at 7:16 PM 1 comment:

As many of you frequent readers know, I recently returned from MilleniumCon in Round Rock, Texas, where I participated in the Texas Big Battalions SYW game. Although the Electoral forces lost, it was a very enjoyable game, especially since I had the honor of playing opposite Bill Protz, author of the rules we used, Batailles de l'Ancien Regime (BAR). You can see several battale reports, pre-battle background, and post-battle reports at these various sites:

Jim
Posted by ColCampbell50 at 7:34 PM No comments:

Marching off to War

Please visit ColCampbell's Barracks over the coming week as I post pictures of the armies of the Margraviate of Carpania, Duchy of Courland, and Duchy of Sachsen-Wachsenstein leaving for the Champs de Mars in Round Rock, Texas at the Texas Big Battalions game.